Enjoy a pair of my fragrant, worn-out socks. I'll let you buy them at a high price and make sock chewing gum out of them following my instructions. This is an extremely stimulating idea, I know. So come and eat my socks!

Mister Apnea has set up a sort of cineforum at home, setting up chairs in rows - one behind the other - just to give the illusion of being in a cinema. The main idea is to watch his favorite TV series with his personal trainer Alessia (young, beautiful and muscular), while sitting behind him. There's only one problem: the personal trainer simply hates that kind of series and when sheÂs bored, she tends to become a very naughty girl with rough, unpleasant manners. First of all, Alessia starts rubbing her dirty black boots against Mister ApneaÂs white clean sweater, very near to his face (how bitchy she is!). Then, she takes off her boots and puts her stinky socks directly under his nose. This is just the appetizer: the main dish of this odd cineforum meeting is... Cheesy Feet!! Finally, Alessia removes her stinky pink socks: a powerfull smell - coming from her soles and toes! - starts spreading throughout the home... a REAL stench of unwashed feet and blue cheese will hit Mister ApneaÂs nose for five smelly minutes: an incredible mix of sweat, feet bacteria and Roquefort's flavor!

Italy is under the snow and Mister Apnea got sick. Since the ItalFetish producer has a very stuffy and congested nose, he takes the decision to go to Alessia, a beautiful new age therapist who specialized in holistic treatments for fetishists with flu. She uses unusual techniques to achieve the goal she sets for everyone, Âcause she thinks that each patient needs his own careÂ especially if he really likes strong foot odor! After covering Mister ApneaÂs eyes with a red towel, the young therapist begins the odd treatment. The patient is asked to breath deeply during the whole sniffing therapy. Of course, Mister Apnea can still sniff something with his nose corked (his nostrils are so powerful!) and right from the beginning, he starts to smell something like rotten sneakers, dirty socks, toejam, sweaty soles and unwashed feet. Our fetishist is very familiar with this kind of bad smells and immediately he feels better; so, when Alessia is ready for the Grand Finale of her Aromatherapy session - it consists in rubbing her pretty feet against his face - Mister Apnea has totally regained his health!

My fragrant, dirty socks are your addiction. When you consume my clip your heart beats higher and your pin dick shrugs joyfully in your pants, sock pussy. You can buy my dirty socks from the clip at a high price. For this I expect a mannerly private message with your financial offer.

Samantha is a beautiful biker girl with amazing blue eyes and pretty little feet. She went to her first set (oh yeah, this is the first fetish video in her life!) with a pair of old motorcycle boots, inseparable and stinky companions in thousands of trips on two wheelsÂas you well know, leather boots are fabulous absorbers of bad smells: so, be careful not to breath deeply when a biker girl removes them! Samantha didn't come all the way to ItalFetish set just to listen to the boring instructions of a video producer about the correct way to do a good fetish clip! The biker is a dominant lady: she canÂt stand pre-fabricated scripts and demands carte blanche to do everything she wants. First of all, she wants to see Mister Apnea kneeling on the floor with the palms of both hands crushed under the metal legs of a small ladderÂ obviously, she enjoys to increase the pressure, sitting and even standing on the steps, ouch! From that uncomfortable and painful position Mister Apnea has to sniff three kinds of nasty smells: 1) dirty stinky boots, 2) sweaty socks and 3) smelly pretty feet. SamanthaÂs foot odor is so strong and sexy that you donÂt need to be a clairvoyant to be able to predict even now that sheÂll take part in many ItalFetish videos!

I come home from jogging and tease you with my all sweaty and smelly socked feet.You have to sniff, lick and watch my shoes and socks closely. After a while I leave you for a short moment, to get something from the basement. Now the the soles of my socks are all black and dirty and I make to sniff and lick them as well. When you think you're done worshipping my nasty socks, I have a special surprise for you. I cook you a sock tea out of these dirty and smelly socks and you have to drink it! Mmmmh delicious! This clip is pure gold for sock lovers. My dirty and smelly feet are also shown in the clip!Enjoy! ;-)

With her victim up against the wall, Suzy seduces him before taking him out.She explains to him how her feet are so powerful and how many victims perished from them.Suzy's victim eventually collapses to the floor. Now with her victim exposed, and while she is still wearing her smelly sports socks, she shoves her feet deep into his mouth gagging him hard.The smell is brutal and she has dirt on her socks, making him gag plenty of times.Her poor little "bunny rabbit" last moments is to endure the smell and gagging effects of her socks and feet....***MESSAGE US IF YOU ARE INTERESTED IN A CUSTOM VIDEO, OR MEET SUZY FOR A PERSONAL FEMDOM EXPERIENCE IF YOU ARE IN THE EAST LONDON AREA***

My little cuck bitch, nate, has been serving Me for a long time now, so this summer, I gave him the ultimate honor (and the ultimate Torment) by allowing him to be present at My wedding in Ireland! After the ceremony, We retired to My hotel room to have some fun! nate bitch has been locked up in chastity for Me for 2 months now, so I, the generous Goddess that I am, offered him the opportunity to get out of chastity early.... for a price. If he wants to get out early, he has to smell My stinky socks!!

There are several ways to sniff stinky feet. For a classic foot fetishist the act of smelling is pure poetry and pleasure at its best, while female domination isnât important: for example, Mister Apnea, the ItalFetish founder, doesnât like bdsm, but he loves to sniff smelly and sweaty feet in relaxed, funny and friendly situations. On the contrary a foot slave prefers to be dominated by arrogant women, who are usually slamming their feet on his face in order to humiliate and annihilate him. In this clip weâll explore a third perspective, taking the point of view of Passive Man, a new super hero of the fetish world. The main characteristic of a passive fetishist man is his complete «non-existence», his odd thought of being a simple collector of bad smells and not a human being. Before the shooting video Passive Man confessed that he wanted at all costs losing his humanity and becoming not only a piece of furniture or a human footrest, but just «The Odor He Sniffs» (!!!). The gorgeous Elena - probably the nicest and cutest girl on the earth, we love her! - and her friend Giadina (black belt in taekwondo) meet each other after a long time on the ItalFetish set and, obviously, start talking about almost everything, with no regard to Passive Man, lying on the cold floor just under their feet. He doesnât hear their words: his whole essence is focused on the smells coming from their stinky socks (at first) and from their unwashed bare feet (in a second time). We donât know if he could totally identify with the strong smell of those feet to the point of «becoming himself their stink» (!?!), but certainly his face - at the end of the shooting - smelled terribly of foot! :) 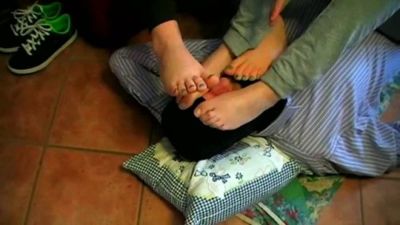