Mistress Lydie don't like to have dirty soles, so, she orders at a slave to lick them clean, they are realy dirty and the slave lick them over and over and when he doesn't lick correctly, Mistress Lydie slap him with a shoes.

When I talked with my girlfriend on the phone, I told her about a slave, that did visit me and what he had to do with my dirty feet. Can you imagine yourself on his place? 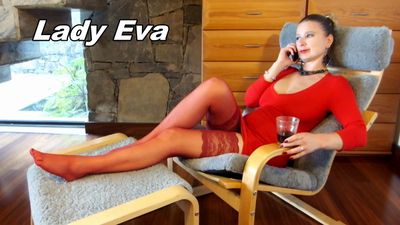 Mistress Kitty and Mistress LÃ©a force a slave to lick clean their old sneakers, after the shoes cleaning, they force him to lick and smell their stinky socks and they put their socks in the mouth slave.

Holy Fuck! Samantha was not really happy with the result on her last clips so she wants to show our webmaster who's the boss in the house! She makes him pay for his bad work by licking the bottom of her filthy shoes! She makes him lick and clean all that dirt at the bottom with his tongue! Samantha also takes her shoes off to smother his face with her sweaty nyloned feet! Don't they stink? Take a deep breathe! I'm very disappointed of your work! Lick all that sweat on my nylons now! Samantha also takes them off to make sure he understands the new rules! She makes him sniff her smelly feet after a long day in her shoes and lick the bottom of her soles! She also makes him suck her toes and laughs at his face! Intense Verbal Humiliation and Dirty Talk! Samantha's at her Best! Just type her name in the "Keyword Search" on top to discover all her Amazing Clips!

Candy is in the great mood. She heard for the great news and she wished to transfer her happyness on someone else. Poor guy has choosen for her puppy today. Better than ever, she enjoys in domination with the sparkles in the eyes. She holds his arm and breaks his neck.

37134 - Trampling and Faceslapping with feet

Goddess Pio trampled her slave in her adidas hi top sneakers. Then She sit on his body and take of her sneaker and put it on his nose. She is slapping him to his face with her sneaker so hardly. She orders him to sniffing her foot in sock and then bare. She put into his mouth her sock and tie up his mouth with glue tape and She is slapping him to his mouth with hands. . Then She again orders him to sniff her feet and slapping him with her feet to his face as just She knows to do this! She is smoking while her feet are on his face and he don't have another chance as just sniffing her pretty sweaty feet! Must see! In description it doesn't possible to describe this all...

So, I got some cheeseburgers and when I get back to the car I tease my slave - hold the burger right under his nose - but he won't get it - yet! He has to take off my shoes while I unpack the burger, lift the top bread and spit on it. Then I simply put the top back and throw it on the ground. I crush the burger right in the middle of the dirty parking lot and grind it under my bare feet. Then he gets to eat a few pieces before I spit on the crushed burger again and he gets to eat the remains. In the end - when the pieces are too small to stick to my foot - I even make him eat it right off the dirty ground :-D

This high heels danced a whole night long with me. My feet are hurting and are incredibly soaked with sweat. Come closer, slave! After you've cleaned my shoe soles, I'll take off my high heels and push my sweaty, stinky feet into your face. You'll inhale the scent of my feet now. Afterwards you'll stick your nose towards my wet and sweaty nylon feet and smell them as long as I want you to!

Noemi is a super hot diva who loves to watch her slave suffer with his nose in her feet so that was just the perfect day to relax and rest her sweaty tired feet in his face! Those cute leather shoes kept her socks and her feet so warm all day long! She needed to take them off! Noemi is now is a perfect position to rub her sweaty socks all over his face! Don't you like that smell loser? Sniff them! Noemi also wants him to take her socks off with his teeth to completely cover his face with her smelly bare feet! She makes him stick his tongue out to lick the sweaty bottom of her soles and clean all the dirt in between each of her toes! She loves the fact that foot worship sessions gives her a really strong feeling of superiority!

Julia just came home after party. Her high-heel shoes are dirty. She tells the slave to lick her black dirty shoes. Slave licks and swallows all dirt from Julia's shoes and heels. When Alex finish with one shoe, he continue to clean the other one.

Princess Tiffany and Miss Veronica are getting "acclimated" at the Mean Girl Mansion and getting used to having slaves literally at their beckon call- and loving every second of it. They find it SO amusing that an unpaid male workers like this can be literally USED for whatever they want- just for the lowly reward of occasionally being allowed the "privilege" of kissing their feet...LOL!They are taking a break from beating the house slaves in this clip- and using other ones as foot-massage servants while they relax...At one point in the clip you can hear Princess Tiffani call a slave on the phone that wanted to pay them to be used as a "human toilet" by her & Miss Veronica during their visit. (Of course, the flake never showed up at the time he was given, even though he said he would...)But mostly this is just the girls being pampered, having their feet rubbed, conversing casually with each other about the losers serving them, occasionally giving orders, and generally enjoying their stay...while being served as a Superior Female should!-Queen Kasey

"Is this for real? You're going to lick my shoes?" Harmony asks in disbelief! She can't believe some retard licks shoes for a living! "This is fucking hilarious!" she says looking on as he humiliates himself at her feet! "I'm going to tell my friends to come to you. That is hilarious. Can I take a picture of you doing this? Can I show my friends? This is so funny!" Harmony says clicking away taking pictures with her cell! She even gets a few close-ups, treating him like some freakshow!Harmony is loving it! "They should have more stands like this, everywhere!". She tells him to start a business chain so girls like her everywhere could get their shoes cleaned at anytime! She finds it so fascinating!She sends a pic to her friend from her cell right then and there (for real too!) while he continues licking the grimy soles of her heels! "Does it bother you if I do this?" she asks while placing a foot on his head while he licks the other! Harmony tells him he should tie a pillow to his head in order to be more useful while girls get their shoes shined! "This is awesome! I feel like I'm on vacation!". While placing her heel into his mouth she pokes the roof of his mouth by accident. He's now sucking her heels clean! "My shoes are gonna be like new!"A very hot scene comes in next after one of her friends calls during the shoot! This is real, no BS! You can actually hear her friend talking on the other line! Now comes the HOTTEST part of all! She tells her friend "You'll not believe what I'm doing right now! I'm getting my shoes licked by a retard! Yup! I know! So funny! You should come and do it too!" Harmony even tells her friend she'll send her the pictures after! Her friend actually sounds interested in coming down herself so she too can get her shoes licked clean! UNBELIEVABLE!At the end Harmony pushes his face away with her foot and walks off!DEFINITELY ONE OF THE BEST CLIPS IN THE SERIES, AND THAT SAYS A LOT BECAUSE THIS SERIES IS HUGE! HARMONY IS SIMPLY INCREDIBLE! HARMONY'S EDITION INCLUDES EXTRA BEHIND THE SCENES FOOTAGE! 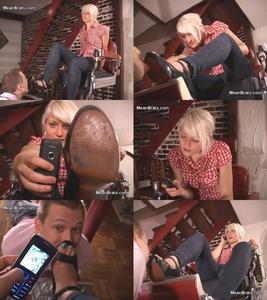 WE NEVER SEEN KRYSTAL LAUGHING SO MUCH IN A CLIP LIKE THIS! She has so much fun humiliating this bitch boy under her desk! The things she does to him is simply humiliating and cruel!A VERY FUN CLIP TO WATCH! 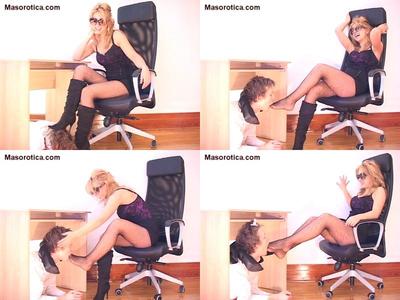 DuneFeet inspectors Teodora and Aurora are in the visit. In the flat of Mitja they are found many malfunctions. He wants to bribe them with the money but they have other ideas. The day with domination instead of money. He has no choice and he must except their offer. The girls sit on the chairs while their slave boy worship their feet.

These 2 blonds remove Their shoes & relax Their pretty feet while telling true stories of making guys be Their maids in college as well as thrashing some dude's car. Ruthless. Miss Tiffany tells her slave to get down low where he belongs so he can open up wide & suck the dirt off Her pretty toes.....What a Bitch!

Mistress Lydie read a book while her slave lick clean her dirty shoes's soles, she then take off her shoes and use the face of the slave like a footstool for her stinky stocking feet.

Mistress Crystal turn at home after a long working day, she orders his slave to smell its really sweaty and stinky feet and boots, use his face like a footstool for her pleasure.

Malezia is the accountant of our company and it seems like she was not really happy about the fact that this guy was not on time for their appointment! She wants to give him a good punishment just to make sure he won?t be late on the next time! She makes him bow down on his knees and take her shoes off to sniff her sweaty nylon feet! They are super smelly and super sweaty since since she is working since six o?clock this morning so she just takes pleasure to rub them all over his face to show him what it is to work that hard! Malezia also makes him stick his tongue out to lick the sweaty bottom of her nylon feet from heel to toes! She also makes him take some deep breaths in her shoes just to make sure he understands about the rules! Hot Clip Alert!

I noticed you staring at my new gym shoes when I was working out today. Most men will stare at my long legs or big tits. But not you! When I caught you looking a few times you seem so embarrassed! Do you have some kind of shoe fetish?? LOL Hmmm I can definitely have some fun with this! I'm going to make you kiss my gym shoes and worship them. Would you like that? It definitely seems like you would! WOW! is it making your dick hard as I talk about it?? Ha Ha Ha Kneel at my feet I have a treat for you!

Candy Blade took this poor girl to the woods to teach her a lesson: there is no escape from her stinky feet! She orders Clarissa to inhale the stench of her sneakers, her fetid socks and sweaty bare feet. She begs for mercy, but she has been taken for a reason: to lick all the sour sweat off the Goddess' perfect soles!