It's Hailey's birthday clip and she's being generous enough to give everyone a 2 for 1 special! The special is her beating up two boys for the price of one! What's special about this clip is that the camera rolls from beginning to end! The clip begins with a 'behind the scenes' look of Hailey organizing the shoot! She walks up to our young webmaster Chris, "We're going to have a 2 for 1 special, come on!". He follows her as she looks into the camera commenting, "I love how people listen to me even though they seen my videos! hahaha". Hailey always stirs up a lot of trouble in her videos, but seeing as how this time is her birthday, this gorgeous angel is about to raise hell!

After tons of shouting and abuse she finally gets the two boys together! She trample/dances on Chris under the back of a chair before placing him beneath her feet as Walter is left choking beneath the stool she's about to sit on! Hailey ignores their suffering as she talks on and on about her new, desginer, sparkly gold dress, that Walter bought her for her birthday! She says it's all thanks to losers buying her clips that Walter buys her really nice designer clothes!

After she's done talking about the dress she turns back to abusing the boys squirming beneath her! Grabbing fistfulls of rocks she throws them at their faces and at Walter's NUTS! She refuses to get off the stool that's choking Walter until he agrees to payout yet another bonus! She continues to stomp his ribs and whip more rocks at him from atop her throne, as the pressure of her weight crushes down his throat keeping him pinned and trapped beneath her!

After she's finally done with them, we see her film another 'behind the scenes' style footage of them slowly getting up in pain!

HAILEY RAISED HELL ON HER BIRTHDAY! SERIOUSLY THOUGH, SHE DID! WALTER RAN AWAY FROM HER SEVERAL TIMES BECAUSE OF HER EXTREME ABUSIVENESS! SHE STOMPED DOWN ON HIS HEAD AND IT HIT THE FLOOR HARD! NOT TO MENTION SHE BREAKS A DOOR FRAME TO GET HIM AND DRAG HIS BUTT BACK IN FRONT OF THE CAMERA! A FUN AND HIGHLY ENTERTAINING MASTERPIECE LIKE NO OTHER CLIP YOU'VE EVER SEEN BEFORE! NO HAILEY FAN SHOULD BE WITHOUT! SHE'S OUR CRAZY JUNGLE MONKEY! :P 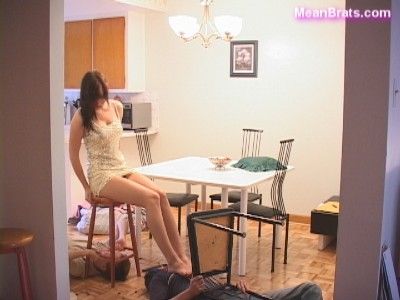 Damn! This clip was shot very late at night after party so it's kind of amateur style! The way we like it! Kristina and Maika have walked all day long in their shoes with no socks so just imagine how bad they stink! They first order him to lick the dirty bottom of their filthy converse before they take them off to cover his face with their sweaty feet! The slave must also lick the bottom of their soles while they're laughing at his face! It seems like Maika really enjoy to fuck his mouth with one of her foot really deep into his mouth! How deep can you take it bitch?

Walter's real-estate agent Laura is still getting him to sign over his fortune piece by piece! While she writes up contracts for him to sign he has to lick her shoes clean before her next office meeting! 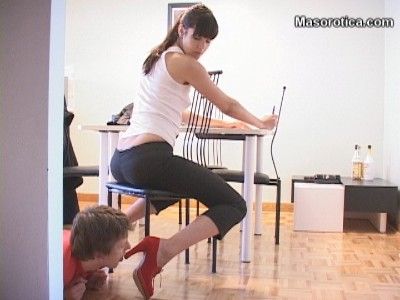 This guy thinks he can out-wrestle two girls at once. He's proven wrong and completely and utterly humiliated. Jennifer Thomas and Liz Lightspeed take turns holding him down and rubbing their feet in his face. They painfully stretch and squeeze him in wrestling holds while his face is smothered and he has to smell their feet. Awesome foot humiliation and domination. 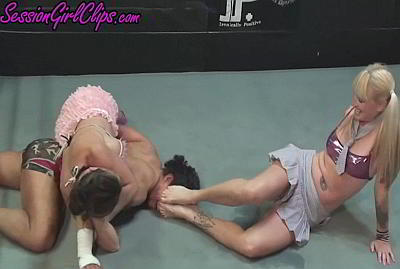 Next great news - we made a lot of brandnew clips with our supergoddess empress victoria! some according to classic outdoor-bdsm-games with riding games, whipping and so on and some indoor. we start today with the first new indoorclip with her loyal footslave. the goddess comes home in the evening after a long day as her slave is already awaiting her kneeling on all foors where he belongs to. she is tired and her shoes are dirty so she takes out a magazine and starts to read, while she orders her slave to clean her shoes. next he has to take off her high heel shoes and has to kiss and worship those gorgeous feet. from the bottom to the top, every mm of her adorable feet has to be kissed and licked. from time to time she likes to give him further instructions, but most of the time he is ignored by this phantastic dominant lady!

Gothic Mistress Absinthia takes off her boots, after she lets him worship her soles and smothers him under her bare soles. There is nothing better like getting smothered under a gothic queens bare, perfect soles!

Sexy readhead Annabelle smothers him under her big feet while listening to the music with headphones so she don't want to hear him suffer under her soles. Fantastic Video incl Point of View Video

These party heels were not made for long walks and she takes them off on her way home. Walking barefoot in the streets is much better. Unfortunately for the slave, her feet are getting more and more filthy with every step she takes. The slave must worship his princess unconditionaly and that means he has to worship the dirt on her feet as well. He is bound to the bed just as she left him an hour ago and she can finally read a magazine, while he licks the dirt off her feet.

One more russian guy has come in our kingdom. He is experienced in high heels trample but she never record. He cames here for two days, but after the seance with Teodora and Deborah, he didn't survive for the second day. The girls are very satisfied with this hero. We have great girls but not so many heroes. They gave him serbian aromatic feet. Right in his mouth.

When She come back to home She order her servant to clean her shoes then after to lick her nyloned feet. feet and shoes worship, verbal humiliation, slapping. 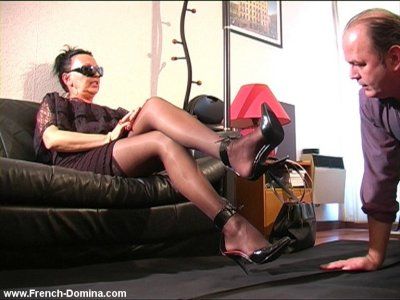 First clip of our new serie " HOLDS FROM HELL III ', Steve is already in deep trouble in this devilish combo !!! Liz is sitting on his chest and has her ankles wrapped around his neck , a painful armbar menaces to pop his elbow out when she bends backward ... covering his mouth when he becomes to groany !!! 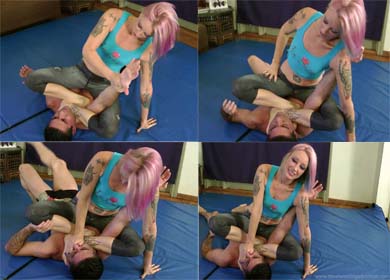 Starring Liz in a total foot domination video !! See Liz using her feet and ankles to choke bound Steve !!! Ankle chokes, foot chokes and breathtaking feet deep in his mouth, making him gagging and turning red !!! The whole video shot in POV with Liz herself handling the camera . 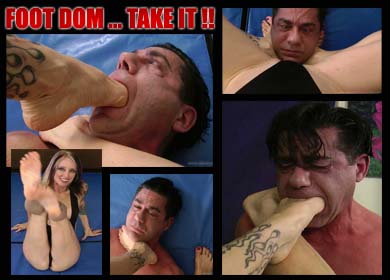 What a shitty situation for you - I mean, who could know that I am the nanny of your kiddies as well as your Femdom and Findom? I unmask losers like you always and everywhere, and that already for years! The behavior of slaves has always the same pattern, the same furtive look to my toes and beautiful feet, when I wear these super sexy high heels. The funniest is, that you always disappear in the bathroom for more or less 20 minutes and that i talk to your wife while you jerk your little thing, thinking about my feet. You have no idea how that makes me smile! If you don't want that I tell your wife about us and your fetishes you should do whatever I expect from you! I will drain your bank account empty while you kneel next to my feet, licking my soles in public will be a pleasure for you... we both know that you would prefer a public session as long as your wife doesn't find out how pathetic you are.

Cassandra was in a mood that night to visit me to watch some of her recents clips and read all your twitter and forum?s comments so I thought it would be great to make a video of this! That was kind of unplanned but I just couldn?t resist on grabbing the camera to film your favorite dream girl! That was a very long day with her boots on so I thought it would be great to take them off to give you a super view on her sweaty kitty socks! The smell was amazing! As usual! That was just torture for me to make this video without sniffing those socks! I?m trying to rub my nose in her socks but it seems like it was not part of the deal! Cassandra is ready to let me sniff her socks and feet but only one condition! She wants to control that camera! She makes me take some deep breaths in her socks and lick that sweat at the bottom! That was a real pleasure! Cassandra also takes her socks off to watch the end of her clip and I just can?t resist again to sniff those beautiful soles! They are so perfect! She takes that camera again to film my tongue in between each of her toes! What a super perfect goddess you are Cassandra! Another hot clip to add to your collection!

The sisters continue to humiliate their pathetic slave and start by wrapping him in cling wrap. He has to smell their feet while his head is trapped in the smother box and he's unable to defend himself - against the physical domination and verbal humiliation! Next the take him out of the smother box and rip of the cling wrap - now he has to lick Jane's high heels clean and suck the dirt from her heels and soles. Of course they can't resist to trample his face in between!

I just got back from shopping - and now I'll make the foot slave clean my dirty flats. Whatever I stepped on in the city - he'll lick it off my shoe soles! After he properly cleaned the shoes I take them off and put them on his nose - I bet they smell pretty "intense" after a full day on my feet! Then he has to smell and kiss my bare feet as well - and finally - of course - lick them clean as well!

22437 - Kitty and Lydie sexy shoes worship at the swimming pool

Mistress Lydie and Mistress Kitty prÃ©lasse herself at the edge of the swimming pool while their flunkey licks their splendid clean their splendid high heeled shoes.